The big picture (a historical perspective)

The long-term valuation of the market is commonly measured by the Cyclically Adjusted Price to Earnings ratio, or “CAPE”, which smooths-out shorter-term earnings swings in order to get a longer-term assessment of market valuation. A CAPE level of 30 is considered to be the upper end of the normal range. The market was recently at that level

Of course, a “mania” could come along and drive prices higher. Manias occur when valuation no longer seems to matter, as buyers rush in to buy first, and ask questions later. Two manias in the last century - the “Roaring Twenties” of the 1920s, and the “Tech Bubble” of the late 1990s - show that the sky is the limit when common sense is overcome by a blind desire to buy.

See Fig. 1 for the 100-year view of Secular Bulls and Bears.

As a reading of our Bull-Bear Indicator for U.S. Equities, we remain in Cyclical Bull territory.

Counting-up of the number of all our indicators that are ‘Up’ for U.S. Equities, the current tally is that three of four are Positive.

U.S. Markets:U.S. stocks recorded solid gains for the week as investors appeared to have reconciled themselves to the depth of the economic downturn and turned their focus to the reopening of parts of the economy. For the week, the NASDAQ added 6%, while the Dow Jones Industrial Average added 2.6% to close at 24,331. By market cap, the large cap S&P 500 rose 3.5%, while the mid cap S&P 400 added 5.4% and the small cap Russell 2000 gained 5.5%.

Commodities:Precious metal retraced some of last week’s decline. Gold rose 0.8% to finish the week at $1713.90 an ounce. Energy rebounded strongly for a second week to close at $26.17 per barrel for West Texas Intermediate crude oil.

U.S. Economic News: The number of Americans seeking first-time unemployment benefits fell by 677,000 last week to 3.169 million—its fifth consecutive week of declines. While lower than the previous weeks’ readings, the number is still more than ten times higher than the typical reading at the start of the year. Some 33 million new claims have been filed over the past seven weeks—a record-shattering surge. This suggests that the current unemployment rate is near 20%.

Manufacturing remains under pressure as factory orders fell at their fastest pace on record in March as the coronavirus pandemic shut down large parts of the economy. Factory orders tumbled a worse-than-expected $51 billion or -10.3%. Economists had predicted just a -9.7% decline. Orders for so-called “durable goods”, fell -14.7%, while orders for nondurable goods slid a smaller -5.8%.

The vast services side of the U.S. economy crashed in April, according to the latest report from the Institute for Supply Management (ISM). The massive losses by retailers, restaurants, hotels, airlines, and other service-oriented companies from the coronavirus pandemic pushed the ISM’s non-manufacturing index (NMI) down 10.7 points to 41.8 in April. It was the index’s lowest reading since the 2007-2009 Great Recession. Although slightly better than the consensus of 40.0, the current level is historically consistent with recession.

The “jobs report from hell” showed the highest unemployment rate since the 1930’s as the coronavirus pandemic and associated lockdown cost the U.S. almost 21 million jobs in April. The unemployment rate soared to 14.7%. In the report, job losses were heaviest at restaurants, hotels, and retailers but every major industry suffered large declines. Surprisingly, even the health-care sector wasn’t spared as nearly 1.5 million jobs were lost in that industry. The unemployment rate surged to 14.7% from a 50-year low of just 3.5% two months ago. In the seven weeks since the coronavirus shut down much of the U.S. economy, more than 33 million people have applied for unemployment benefits.

International Economic News: Philip Cross, with the Macdonald-Laurier Institute, argued governments and policymakers haven’t fully grasped the consequences of restricting and closing down parts of the economy. “For some sectors, years is going to be the good time required for recovery,” he says, pointing to Air Canada, which recently announced it will take about three years to recover after the pandemic losses. “But the idea that we’re going to have a ‘V-shaped’ recovery where we go straight down and then we go straight back up, that’s not going to happen. It’s much more likely to be much more like a ‘hockey stick’ kind of decline with a slight uptick at the end,” he says.

According to the latest forecast from the Bank of England, Governor Andrew Bailey said the bank would respond as necessary to support the economy as the coronavirus threat evolves, but stopped short of announcing any new stimulus measures. The Bank of England said that GDP contracted by 3% in the first quarter of this year and would fall by as much as 25% in the second quarter, leaving the economy about 30% smaller than it was at the end of 2019.

French Prime Minister Edouard Philippe said the country was ready for a nationwide plan to relax curbs on public life, though strict controls will remain on public transport in Paris, where infection rates remain high. “We are always looking for a balance between the indispensable return to normal life and the indispensable respect of all measures that will prevent the epidemic from restarting,”

German researchers say the world should brace itself for a second and even a third wave of the coronavirus pandemic before the population achieves sufficient immunity to the virus. Lothar Wieler, president of the Robert Koch Institute, said “This is a pandemic, and in a pandemic this virus will remain on our list of medical concerns until 60% to 70% of the population has been infected," he said. But Wieler also praised the German government for its handling of the outbreak.

Over 80 million Chinese are believed to already be out of work, and over 9 million more are expected to join them in the near future. While official data from Beijing is often more than somewhat suspect, even the official numbers are starting to spike. Willy Lam, adjunct professor at the Center of Chinese Studies at Chinese University of Hong Kong said, “China's unemployment could be seriously understated. It's unusual they are willing to report data that bad.

Japanese household spending plunged at a record pace in April, fulfilling expectations that the coronavirus pandemic was tipping the world’s third-largest economy into a deep recession. Analysts say “Even without the virus, Japan’s economy was very weak due to the hit from last year’s sales tax hike. “The economy may rebound somewhat in July-September but won’t return to pre-coronavirus levels for the rest of this year,”

Finally:Even as the S&P surged back in April from its March lows, market technician Tom McClellan noted that investors have been fleeing one of the most popular ETFs on Wall Street. The SPDR S&P 500 ETF, symbol ‘SPY’, gives investors exposure to the stocks that make up the widely-followed S&P 500 index, and is among the most liquid and frequently traded ETFs in existence. McClellan noted that, despite rising more than 29% since touching its low on March 23rd, funds have been flowing out of the SPY. However, in good news for market bulls, McClellan writes that negative flows may actually indicate that the uptrend in stocks could continue higher.

The Big Picture: 120 Years of Secular Bulls and Bears 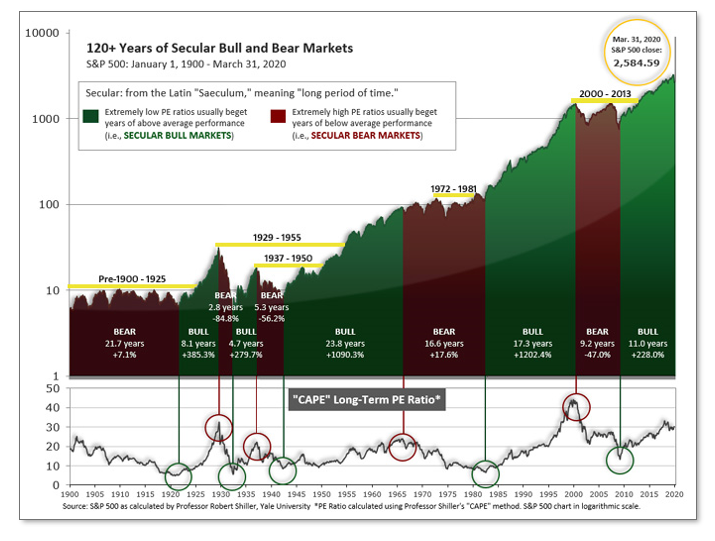